Atlas Arts, a small local Arts project company, contacted all Skye schools at the end of last year.  They were offering a workshop with a well-known artist to make  an artistic response to one of the Ten Pieces, a BBC  and SSO initiative which was trying to make classical music accessible to pupils.

GM5/6 from PPS signed up for the project.

David Lemm was selected as our animator and he worked with the children to storyboard the piece of music selected for us, The Storm by Benjamin Britten.  The children immediately decided that it was the story of a small boat at sea and various things would happen to this little boat before it would ultimately crash and sink.

They listened to the music carefully and storyboarded each section.  They then went to work cutting out the scenes used in the animation.  These scenes were then put on a table below the camera and photographed.  The children would then move pieces slightly and capture the scene again.  The children took hundreds of photos!

David and Shona Cameron from Atlas Arts  showed the children how the clips would run using computer software.

The work with David Lemm was on the Monday to Wednesday prior to the SSO concert on the Friday, when our animation would be shown.

During this time we also had the L.A.B from the BBC working with a group of GM6 girls from the class who were asked to make a short documentary about the making of the animation for the BBC.  As our class is a Gaelic Medium class, two documentaries would be made, one in gaelic and one in English.

The girls were taught the art of documentary making, scripting, presenting, sound, camera and editing. They interviewed the artist, the conductor of the SSO and several of their peers.

Our whole class then attended the workshop that took place in Portree High School and used instruments to play along with the SSO.

Dè a-nis? had also heard about our project and came along too to record what was happening.

The children were so enthused by this project and learned a tremendous amount of new skills through the new experiences they encountered.

Here is the animation that the children worked on.

If you are having trouble viewing the animation here, follow this link.

The documentary made by the GM6 girls in Gaelic

The documentary made by the GM6 girls in English,

The Dè a-nis? episode is here. The section of the show with our school is roughly 12 mins in.  It also shows all of our pupils that took part in the workshop.

At Portree Primary School we work together as a school community to support young people to succeed in all areas of life.  We believe in an ethos of Achievement For All.  We aim to celebrate achievements of all kinds. We recognise the wide range of skills our pupils have to offer and encourage them to   utilise their skills in the school, in the community and in the wider world of the workplace.

Our school life is based on the core values of; determination, respect, kindness, friendship and enjoyment.  These are values we hope our pupils inspire to in their school their families and their wider communities.

We sincerely hope that all parents, pupils and the wider community participate fully in the life of Portree Primary School to provide the very best experience for our young people.

Should you wish to discuss your child’s progress or have any concerns, please do not hesitate to contact the school immediately. 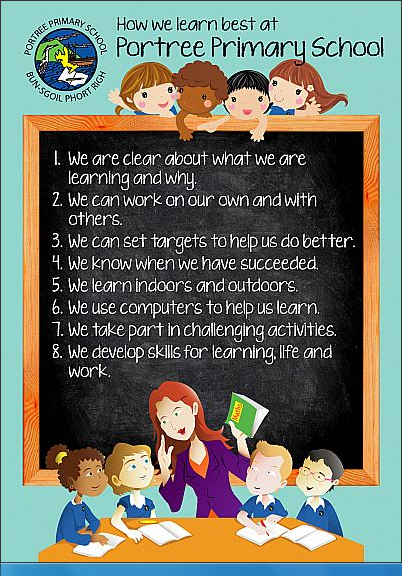 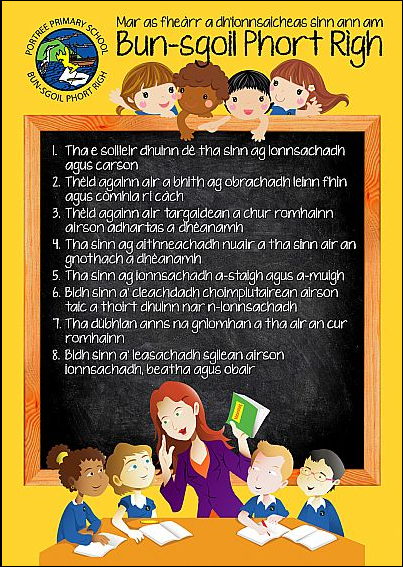 The school uses an 'answerphone' system for school announcements and closures especially in times of adverse weather. It is also used to provide updates on school events such as sports day etc.

Please try not to dial the school main number as the line is likely to be busy and you may not be able to get through.
Instead, please call the Highland Council Telephone Messaging Service on: